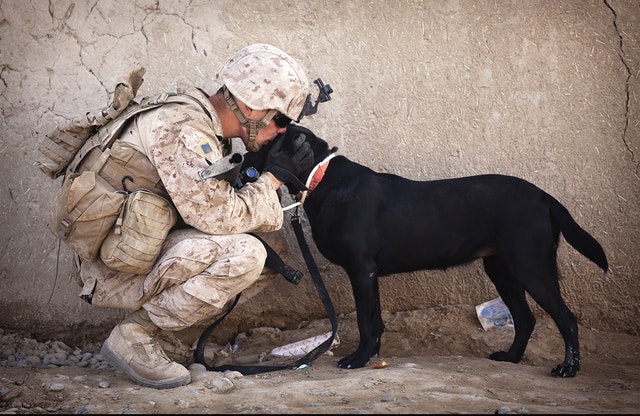 Across the world, millions of individuals continue to believe that addictions and mental health disorders only impact those that have chosen to become addicted to a substance or behaviour.

However, drug and alcohol addictions do not discriminate by age, sex, nationally or profession.

Over the years, the British Armed Forces have been no stranger to drug and alcohol addictions within the ranks.

Although the Armed Forces have implemented several measures to support those serving in the Armed Forces, an increase in the number of individuals struggling with addictions and mental health disorders has seen a surge in demand for rehabilitation treatment.

Irrespective of whether you are a Veteran or not, we have outlined how addictions and mental health issues commonly arise in individuals that have served in the Armed Forces.

We have also provided a wealth of information regarding the treatment that we can offer to those struggling with addictions and mental health disorders.

Alcohol Use Among Veterans

Many Armed Services staff often drink an excessive amount of alcohol due to peer pressure, especially amongst new recruits. This pressure to drink excessive amounts of alcohol can continue many years into an Armed Forces career. Irrespective of the rank or squadron an individual belongs to, drinking culture seems to exist in all areas of Armed Forces life.

In addition to drinking an excessive amount of alcohol throughout their time in the Armed Forces, many Veterans turn to alcohol in a bid to cope with the pessimistic thoughts and feelings that they may have encountered as a result of deployment to foreign countries during times of combat.

As the euphoria and relief that alcohol provides, enables Veterans to relax and alleviate the thoughts and flashbacks that will frequently swarm their mind, they may gradually become reliant on alcohol and sadly develop an alcohol addiction.

As a result, irrespective of whether an individual develops an addiction during their time in the Armed Forces or before entering the Armed Forces, many will feel isolated and in an impossible position when it comes to seeking professional treatment that could help them overcome their addiction.

In the same way that alcohol addiction can arise due to the ramifications that deployment and combat have on an individual’s physical and psychological health, drug addictions can too.

Sadly, many will leave their addictions untreated due to feeling ashamed of their behaviour. Many will also avoid securing treatment due to the stigmas that surround addictions and addicts.

It should be noted that in recent years, addiction to legal prescription drugs has been on the rise amongst members of the Armed Forces.

Distressing psychological trauma, which is common amongst servicemen and women following the completion of combat duties, has undoubtedly provided the impetus for drug and alcohol abuse among those who have served within the Armed Forces.

Such trauma can develop into Post-Traumatic Stress Disorder (PTSD), which has been linked to alcohol and other substance abuse.

Although Veterans are typically provided with support from the Armed Forces to help them overcome addictions and mental health disorders, many individuals find that they feel somewhat isolated from their Armed Forces peers.  As a result, they seek veteran rehabilitation support elsewhere.

If this resonates with you, at Cassiobury Court, we can provide you with veteran rehabilitation support, irrespective of the addiction or disorder you are struggling with.

At our residential rehab centre, we boast industry-leading treatments and personalised treatment programmes that see clients progress through detoxification and rehabilitation.  To ensure that our clients have the support they need to make a long-term recovery, we also provide 12-months of free aftercare support to those that complete one of our programmes.

To determine the rehabilitation support you need, we will conduct an admission assessment as you enter our centre.  This will enable our team to understand your personal circumstances, determine the physical and psychological ramifications your addiction or mental health disorder has had on your life and recommend suitable treatment.

Although we cannot determine the exact treatment you will require without speaking to you, it is not uncommon for veteran rehabilitation support to include dual diagnosis treatment.

This is because many veterans struggling with mental health disorders such as Post-Traumatic Stress Disorder will turn to substances such as drugs and alcohol in a bid to reduce the overall consequences they experience.

Dual diagnosis treatment focuses on alleviating a substance addiction through detoxification before providing rehabilitation and therapy to help veterans navigate their thoughts and feelings.  In doing so, coping strategies can be created to reduce the severity of mental health disorders.  Coping strategies will also help identify and overcome any triggers.

At Cassiobury Court, we have successfully helped hundreds of Armed Forces servicemen and women overcome addictions and mental health disorders such as Post-Traumatic Stress Disorder.

Should you decide to attend our drug and alcohol rehab, your anonymity will be assured, and a full aftercare service will be implemented to ensure your long term recovery success is maximised.