The liver breaks down harmful toxins such as alcohol. Enzymes in the liver chemically alter ethanol into intermediaries, which in turn are broken down into harmless molecules such as water and oxygen.

Such by-products are expelled from the body in your urine. The liver is capable of processing one unit of alcohol per hour. When you exceed the amount of alcohol the liver can process all in one attempt the blood absorbs the excess alcohol and you feel ‘drunk’.

Each time the liver comes into contact with ethanol (the active toxin in alcohol) a number of liver cells perish. The liver is however very resilient to such toxins and able to repair itself.

It is often said the liver is the body’s second most advanced organ after the brain and the liver’s ability to bounce back from even the most growling of self-inflicted abuses is well documented.

However, if problem drinkers continue to abuse alcohol over a prolonged period of time the onslaught of cell damage will impair the liver’s ability to regenerate itself. This leads to permanent liver damage and death. Symptoms of alcohol-related liver disease (ARLD) can include:

However, ARLD doesn’t usually cause symptoms until the liver has been severely damaged. So, if you’re experiencing any of the above symptoms and suspect its alcohol related, it’s critical that you seek medical support immediately.

The initial stages of ARLD are marked by ‘fatty liver disease’ (FLD) whereby large deposits of fat build-up within the cells of the liver, typically over a short period of time.

For most people FLD goes entirely unnoticed and when symptoms do occur they usually come in the form of abdominal pain, but it’s an important warning sign that you’re drinking at a harmful level.

If you do not consume alcohol for a few weeks or so the body will expel this build-up of fat in the liver meaning that the effects of fatty liver disease are thankfully reversible.

If you abuse alcohol over a prolonged period of time your liver can become inflamed causing an ARLD known as ‘alcohol hepatitis’ (AH); this is complexly unrelated to infectious hepatitis. Similar to FLD above, AH entails a build-up of fat within liver cells.

Alcohol hepatitis also causes mild liver scarring. FLD varies in severity between clients and there’s a good chance that FLD will retreat upon ceasing to drink alcohol. In fact, most sufferers of mild AH will not even notice any symptoms at all.

For these clients, the illnesses can only be diagnosed via a blood test. However, most sufferers of AH only learn of the illness’s existence once the condition has reached a critical stage, meaning there exists the risk of liver failure and death, sadly a large number of people die from the condition each year in the UK.

Symptoms of AH include abdominal pain and sickness. Furthermore, a chemical known as bilirubin which is usually broken down in the liver is allowed to build up in the bloodstream when the liver is weakened by AH. This leads to the well-known ‘yellow-effect’ which is displayed by people suffering from the illness.

‘Cirrhosis’, or ‘scarring of the liver’ is a far more insidious variety of ARLD and the one most associated with liver failure and death. Like other forms of ARLD, the sufferer tends to only seek help for symptoms once the illness has reached a critical condition. Cirrhosis can also lead to liver cancer.

Cirrhosis takes places when the healthy soft tissue in the liver is replaced by scarred tissue, a process known as ‘fibrosis’. Unlike the liver’s normal soft tissue, scar tissue is unable to regenerate once liver cells are destroyed after coming into contact with toxins.

Due to the fact the liver can function with a reduced number of healthy liver cells, most sufferers do not seek medical help until the illness has reached a critical condition. The NHS states that “someone who has alcohol-related cirrhosis and does not stop drinking has a less than 50% chance of living for at least 5 more years”.

Medical experts who are involved in the treating ARLD clients are unanimous in advising sufferers to give up the consumption of alcohol. Not considering the possibility of a total liver transplant, currently, here does not exist any invasive medical procedure to treat ARLDs.

If you experience any warning signs and suspect you are suffering from ARLD then you are strongly advised to seek out the services of an alcohol detox centre and to be examined by your GP.

Blood tests can reveal the severity of the damage you have potentially caused to your liver through alcohol abuse, as can an ultra-scan. Furthermore, a sample of the liver can be taken, a process known as a ‘liver biopsy’.

Aside from treatment, the most effective way to prevent alcohol-related liver disease (ARLD) is to stop drinking or at least stay within the recommended limits which are no more than 14 units a week for men and women, it’s also advised that you spread these 14 units over 3 days or more if you want to drink this much within a week.

The Office National Statistics data reveals 55-59-year-olds are most at risk of dying from alcohol liver disease. The y axis in the below graph represents deaths, showing 950 people aged 55 to 59 perished due to Alcoholic liver disease in 2018. 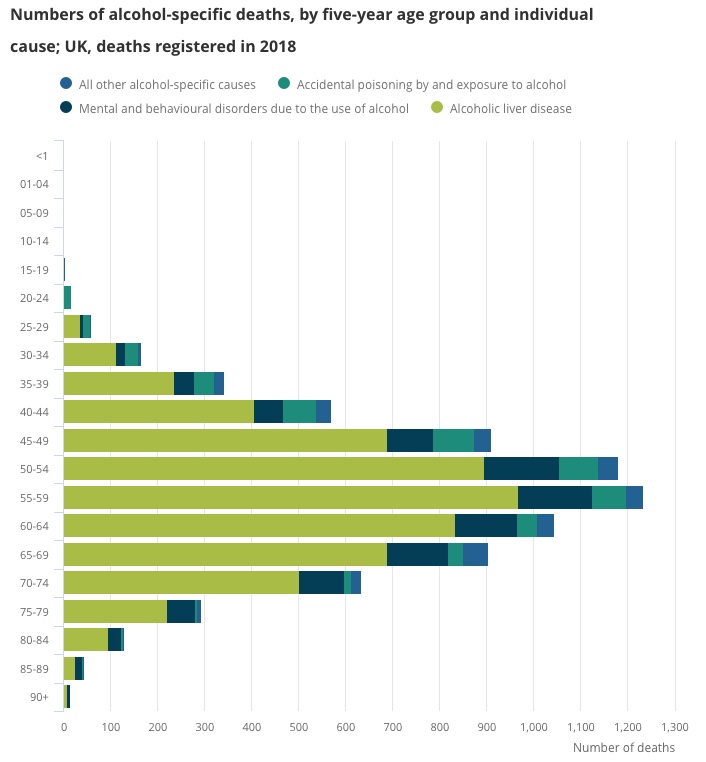