Damaging Effects Alcohol has on Body

Over the last month, you’ve probably discovered the concept of “dry January“. In fact, it’s highly likely somebody close to you is currently attempting to stay ‘dry’ for the month of January.

Studies reveal alcohol consumption increases by around 40% during Christmas, so many of you will jump on the ‘dry January’ bandwagon in order to ‘reverse’ some of the damage your drinking has done during December.

Although dry January is nothing new, the increased popularity for this year’s ‘dry January’ is largely down to organisations such as Alcohol Concern and Public Health England’s decision to promote the concept via social media and TV advertisements. Dry January is also supported by a number of prominent alcohol rehab centres.

In this post, we wish to inform you exactly how (and why) alcohol is bad for your health.

Studies reveal more than 25% of Brits drink more than the recommended dose of alcohol each day. Currently, the Government recommends both men and women do not exceed 14 units of alcohol during a seven-day stretch. One unit of alcohol is the equivalent of one 25ml single measure of vodka, or a 33% of a pint of strong lager.

However, the Government does not recommend any level of drinking can be considered ‘safe’, even if you drink less than 14 units per week. 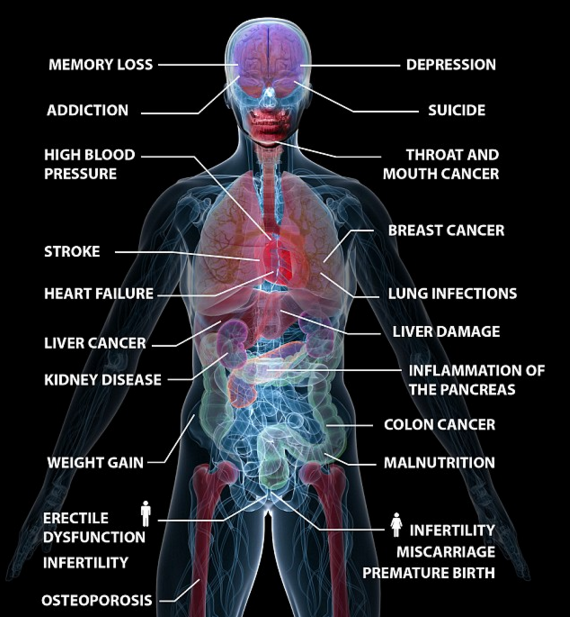 Now we discuss how alcohol affects different regions of the body:

Abusing alcohol hinders a man’s ability to have sex. For instance, alcohol abuse leads to temporary erectile dysfunction and lowered levels of testosterone. Lower levels of testosterone may cause irreversible damage to the testes. Damage to the testes reduces a male’s ability to produce sperm. Since sperm is an essential element of fertility, alcohol abuse can lead to infertility.

Alcohol abuse also reduces females’ ability to reproduce. Experts believe this is due to the hormonal imbalance that’s caused by overindulging in alcohol, although the precise mechanism for this is largely unknown.

A study conducted at the Harvard University in America revealed women in receipt of IVF treatment were 17% less likely to conceive when six or more units of alcohol were consumed per week.

Research after research proves the strong link between regular alcohol consumption and cancer. Organs most at risk of alcohol-induced cancer include the liver, breasts, bowel, mouth, oesophagus and throat.

When alcohol reaches the liver it is broken down into a metabolite known as acetaldehyde. Acetaldehyde then damages strands of DNA contained in the liver. Experts believe damaged DNA may then lead to cancer.

Damage to DNA is increased when alcohol is mixed with tobacco. This is because tobacco smoke is a solvent. This solvent allows alcohol to be absorbed more quickly in the body. This increased rate of alcohol absorption is thought to increase the odds of getting cancer due to the damaging effects this has on DNA.

Alcohol also increases the production of oestrogen. Most forms of breast tumours are oestrogen fed. Therefore, alcohol-induced oestrogen may increase the odds of developing cancerous tumours.

Since alcohol is calorie-heavy, excess alcohol gets converted into fat when it is metabolised in the liver. Over time fat cells from alcohol accumulate within the liver causes ‘fatty liver syndrome‘ (FLS). FLS prevents the liver from functioning correctly.

FLS also causes cirrhosis (scarring of the liver). The exact mechanism for cirrhosis remains a scientific mystery. However, researchers have proven beyond doubt the link between alcoholism and cirrhosis.

Alcohol is known as a diuretic because it causes the body to dehydrate itself. An unnecessary amount of water escapes the body when alcohol is abused. This affects the skin and hair as well as the organs of the body. Dehydration means the skin becomes dry.

The skin is also drained of essential minerals such as iron. A lack of iron leaves the skin looking pale. Alcohol also leaves the skin more susceptible to sun damage, since excessive alcohol consumption depletes the body of vitamins essential for collagen production. These vitamins include vitamin A and C.

Many people who abuse alcohol also suffer from rosacea. This condition is characterised by red patches on the sufferer’s face. Alcohol causes rosacea because it dilutes red blood vessels located under the surface of the face. Chronic alcoholics suffer from permanent red patches. This is because these red blood vessels have burst. This condition is characterised by a ‘drinker’s red nose’.

Alcohol abuse takes its toll on you mentally as well as physically. Alcohol abuse is known to cause depression, anxiety, self-harming and even suicide. For instance, around a third of all suicides in the UK are related to alcohol abuse or alcoholism.

Alcohol disrupts an important neurotransmitter in the brain known as GABA-A. GABA-A is an inhibitory neurotransmitter that slows down the brain. Alcohol’s interference with GABA-A receptors is believed to instigate alcohol ‘withdrawal’ symptoms suffered when somebody who’s alcohol-dependant attempts to ‘detox’.

When alcohol enters the body, it makes its way into the bloodstream. The heart is tasked with moving the alcohol to the liver for processing. However, alcohol passes through the heart’s central valves. Experts believe alcohol is toxic to cells located within and around the heart. This toxicity causes heart cells to perish.

Died cells within the heart are then replaced with a fibrous type of connective tissue. This tissue is not capable of contracting as well as the healthy cells it replaced. This causes a disease known as cardiomyopathy. This is characterised by weakened heart muscles. The heart’s ability to pump oxygen-rich blood around the body is reduced. Essential tissues and organs are thus starved of oxygen. Symptoms of cardiomyopathy include: