Why Is Heroin So Addictive? 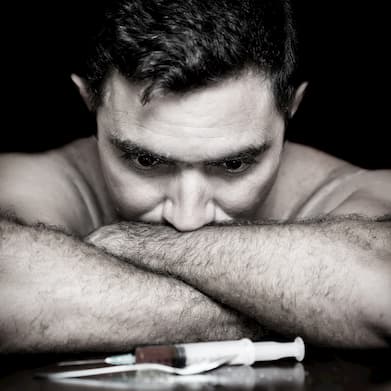 It is well known that heroin is one of the most addictive drugs on the street, able to form a dependency quickly and cause devastation to the lives of users after just a couple of hits. However, this information does not seem to stop people trying it, and drug related deaths in the UK, particularly those from heroin, have doubled since 2012.

As with many drugs, the addictive nature of heroin is linked to its effect on the brain, wherein it tricks the motivation and pleasure centres of the brain into desiring the drug, and remembering the positive feelings associated with it. It also minimises reactions to the health problems brought on by heroin, making it easier to keep using than to come off it.

Heroin is an opiate, created from morphine, which is extracted from the opium poppy. Opioid drugs are used as painkillers, for the most part, and small amounts are used in prescription drugs and those which are available over the counter. Heroin is a very powerful opiate, usually sold as a brown or white powder, and can be smoked, injected and snorted.

How does it make you feel?

Heroin offers users a feeling of euphoria, making them feel happy, relaxed and sleepy. Although it is one of the most addictive drugs out there, the ‘rush’ is actually not as intense as that brought on by drugs such as cocaine or crystal meth.

The high from heroin is also fairly short, and doesn’t last as long as many prescription drugs, whilst tolerance builds quickly. This leaves regular users more vulnerable to a heroin overdose.

The first dose of heroin is often described as very unpleasant and causes dizziness and vomiting. It also reduces the heart rate and slows breathing, leaving the user’s mind ‘fuzzy’.

It is thus not the sensations brought on by heroin that make it so addictive.

How does heroin affect brain chemistry?

Heroin forms a dependency in various ways. One of the reasons that it is so addictive is the ways in which it is taken. Whilst prescription opiates are swallowed, processed by the stomach and liver and producing moderated levels of pain relief, snorting, injecting or smoking the drug means that it enters the bloodstream and goes straight to the opioid receptors of the brain.

Heroin affects the parts of the brain that are involved with pleasure, depression, anxiety and sedation (sleepiness). As soon as the drug hits the brain the user feels happy and relaxed, free from any anxiety or depression that they might have otherwise been feeling.

Over time, heroin abuse also starts to affect the parts of the brain involved with self-control and judgement. The user will begin to crave the drug, and the brain will minimise the negative effects of heroin, whilst emphasising the good feelings that come with taking a hit. This eventually creates a serious dependency.

There is an image of heroin users as homeless, or people who were already suffering from drug addiction that just naturally progressed to harder drugs. However, many heroin addicts start off by becoming addicted to prescription opioids.

Popular opioids available on prescription in the UK include:

Although these drugs are heavily regulated and do not provide the same intensity as a hit of heroin, they are essentially the same thing. As tolerance to a prescription drug builds, the user may start to take more and more, until they are unable to get a prescription for it anymore.

On the street, prescription opioids are incredibly hard to source, and even when they can be found they cost a lot. For example, a single 50mg Tramadol pill costs £10 on the streets, whilst a bag of heroin can be as little as £5.

Many people who use heroin say that it is actually the withdrawal from the drug which makes it so difficult to quit. Once an addiction has been formed, the user requires a certain amount of heroin in their system to avoid becoming ‘dope sick’.

Whilst tolerance to the drug might mean that they don’t feel the same rush of euphoria anymore, they physically need to keep the drug in their system to avoid withdrawal.

Heroin withdrawal can be best described as a very serious case of the flu. Symptoms include:

Heroin withdrawal lasts longer than the withdrawal from cocaine or meth, and the symptoms are far more severe. Withdrawal symptoms usually begin within the first 24 hours after the last hit, peak within 36 to 72 hours and can last up to 10 days. For chronic users, this could begin within 4 hours and continue for up to four weeks.

How long does it take to get addicted?

Although heroin addiction does not begin after just one use, as many people believe, the pleasurable feelings that it induces can motivate people to use it again. A physical and psychological dependence on heroin may actually take a while to set in, during which time the user will probably think that they have their use under control. However, as tolerance to the drug starts to go up, they will need to take more of it, and more frequently, to feel the same effects.

For this reason, a heroin user is often already an addict before they even realise that there is a problem.

For those looking to break an addiction to heroin, the only real way to do so is to go through a detox programme, so that they can be supported and taken care of during the worst of it. Cassiobury Court runs a heroin addiction treatment programme of up to 90 days to deal with anyone at any stage in their addiction, helping them to detox safely and with the least amount of pain.

Clients are able to use various treatment options to work through the causes of their addiction and work on a recovery plan to help them once they leave rehab, and ensure that they stay on the right path moving forward.

If you are an addict, the best thing you can do for yourself, your family and your future is get the help you deserve, and learn coping skills that will help you to put this part of your life behind you.