Our Guide to Vaping Addiction 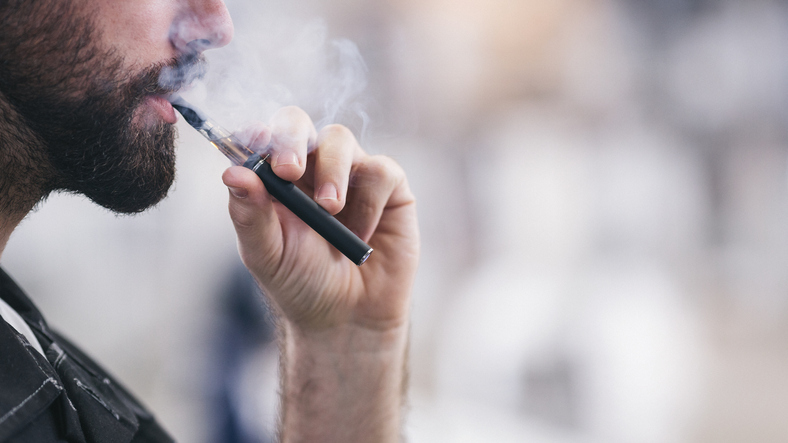 As concerns regarding the connection between cancer and tobacco-based products have increased over the last decade, individuals have in time started to boycott traditional cigarettes by alternatively using battery powered, vaping devices.

Yet without thorough background research, users have continued to unknowingly damage their health through vaping.

Although little evidence is currently available, especially when comparing to alternative addictions, continuous vaping has caused damaging effects for some users on a global scale. Without this solid evidence, vaping has become a common worldwide trend, perceived as a low hazardous alternative to smoking. Yet the chemicals within a vape can be damaging if used for the long-term, along with causing addictive tendencies.

Are you experiencing a vaping addiction? This is highly common for those who’ve previously suffered with an ongoing addiction to traditional cigarettes. Like any other form of substance abuse, this can be a very difficult time to overcome. Withdrawal symptoms are likely, influencing greater use of electronic e cigarettes. Yet this habit is now identified as harmful, causing much distress for those suffering with signs and symptoms of a vaping addiction.

If you’re suffering with an addiction to vaping devices, or you’ve spotted signs of a nicotine addiction, sourcing support through health professionals should be prioritised. Here at Cassiobury Court, we can offer effective guidance relating to the steps to take if you’re looking to reduce or overcome your vaping habit. See our guide to vaping addiction, the signs and symptoms to look out for and the dangers linked to consistent vaping. We hope this guide will provide greater background knowledge on the latest addictive habit effecting the UK.

The Rise Of Vaping

Over recent years, significant scares have influenced the decrease use of traditional tobacco products. This alarm was linked to the increase health damages connected to nicotine and tobacco, known to cause cancer, lung disease and further life-altering conditions. Yet with this trend, those addicted to cigarettes have replaced traditional products with electronic devices.

Battery powered vaping devices circulating the shops contain nicotine mixed with glycerine and propylene glycol. Yet the biggest selling point is the large number of flavours available to mask these addictive chemicals. This mixture of liquid is then heated up in a vaping device, making it possible to consume on the go; a further selling point for consumers, as portable e cigarette devices promote convenience and accessibility.

With the rising apprehensions regarding traditional nicotine products, e cigarette devices were introduced to help those with smoking addictions reduce consumption of harmful toxins; ultimately deflecting from one addictive chemical, to another. Yet, as vaping has also increased, concerns have come to light regarding the dangers of e cigarettes on the body and mind, along with the increase number of vaping addictions.

Although many will back the benefits of electronic vaping devices, usually linked to the reduction of traditional smoking, there are many hazards connected to continuous use of vapes. As vaping is a newer habit, the depth of knowledge and research linked to health concerns is lacking, especially when comparing to further substance misuse.

However, recent cases have identified dangers linked to vaping addictions. Like any other addiction, behavioural illnesses can cause both physical and psychological impairments. Once hazardous toxins have been consumed over a long period of time, connected illnesses are likely, causing life-changing damages.

The greatest concern of traditional smoking came from the large and consistent consumption of tobacco. Tobacco is highly dangerous on the body, which fortunately isn’t present in current vaping liquids. Yet the chemicals present in vaping devices are harmful and have known to influence respiratory problems and weakened immune systems, along with delaying brain development, especially in younger people.

One of biggest worries linked to vaping is the level of nicotine used by individuals. As addictions develop, tolerances to nicotine will also progress, requiring higher levels to achieve optimal effects. Yet by consuming high levels of nicotine on a regular basis through vaping devices, many conditions linked to the heart can develop. Common nicotine side effects include high blood pressure, narrowing of the main arteries, the potential of hardening the arterial walls and the increased risk of heart attacks. Although this may seem a long way off, chronic vaping can trigger circulatory and cardiovascular damage.

A further worry connected to the common trend of vaping is the innocent image it has. As users believe that vaping carries little harm, this will usually result in greater use. Likewise, as the visibility of side effects to vaping are less noticeable, especially when comparing to hard drugs, damages will go unnoticed, up until an addiction has developed. The invisible effects can also cause damage through second-hand passive use of vapes, creating concern for those surrounding consistent vaping use.

Additionally, as a potential vaping addiction is likely to mature, especially when considering consistent use of high nicotine levels, the probability of leading to further addictive behaviours is also likely. If you believe you’re currently living with an addiction to vaping, sourcing support through medical and psychological treatment will be recommended.

Signs And Symptoms Of A Vaping Addiction

As vaping is perceived as less hazardous, especially when considering traditional cigarettes, users are denying the likelihood of developing an addiction. Yet, it is possible that vaping addictions can develop, especially when vaping consistently.

Have you swapped tobacco-based products with vaping devices? Do you find it difficult to leave the house without your portable vape? Do you consistently turn to your vaping device? Are withdrawal symptoms presenting themselves when delays in consumption are occurring?

If you find it difficult to reduce the use of your vaping device, an addiction could be on the horizon. In this situation, the guidance of health professionals will be encouraged.

Like any form of substance misuse, vaping can begin unintentionally. In most cases, the use of a vape has been consumed to revert health damages linked to traditional cigarettes. Yet as individuals begin to vape regularly, a tolerance will usually build up. In this situation greater nicotine consumption will be craved, along with altering flavours and strengths of glycerine and propylene glycol.

Yet here is where a vaping addiction can develop, making it difficult to quit. In this situation, withdrawal symptoms will usually make an appearance, influencing further nicotine cravings. Withdrawal symptoms which are likely to be experienced include depression, insomnia, breathing problems, and a weakened immune system. As the rise of symptoms increase, individuals will usually increase the level of nicotine within their vaping devices to work through these uneasy feelings. Yet this is where long lasting damages both physically and mentally can develop.

Source Advice For A Vaping Addiction

If you’re living with a vaping addiction, to avoid the uncertainties linked to the vaped chemicals, reach out for support. Support can be accessed through health professionals, along with rehab facilities. As vaping is relatively new, especially when considering addictive tendencies towards it, a reduced number of treatments are available. However, like any other addiction, treatment is available to disconnect cravings.

Depending on the causation of your vaping use, a mixture of both physical and psychological treatment methods may be required. Likewise, for some individuals, a dual diagnosis of an existing mental health issue may be present, which will require highly targeted therapeutic treatment. Attempting to detoxify from high levels of nicotine can be difficult, especially as physical and mental cravings present themselves. However, it is possible to work through a nicotine addiction, and in turn a vaping fixation.

Here at Cassiobury Court, we can advise you on the best steps to take when considering your vaping addiction. Although addiction treatment for vaping isn’t currently available from our rehab facility, we are addiction specialists, understanding the demands of substance abuse on the body and mind. Likewise, we are experts in addiction treatment, appreciating the steps required to diminish a fixation. In this situation, we can offer a listening ear along with expert advice regarding your future steps.

When considering vaping, it is very difficult to forecast future effects. As a direct correlation hasn’t been promoted between vaping and critical illnesses, it is difficult to gauge whether these chemicals will cause life-altering impacts for all. However, the current knowledge showcases how dangers are present, along with the likelihood of developing further addictive tendencies.

We’ve supported many clients whose addictions have started innocently. A small level of alcohol or cocaine has developed into an addiction, causing unbearable withdrawal symptoms. With this in mind, if a vaping addiction has the scope to develop, further fixations and mental health issues could be on the horizon.

To open up about your vaping addiction or to discuss future steps, feel free to reach out to our team today. We will highly recommend the support and treatment through health professionals when considering an addiction. Although little side effects may currently be influenced from your vaping use, it is highly important that you consider the potentials of an addiction, and the connected impairments possible.