The Truth About Synthetic Cannabinoids 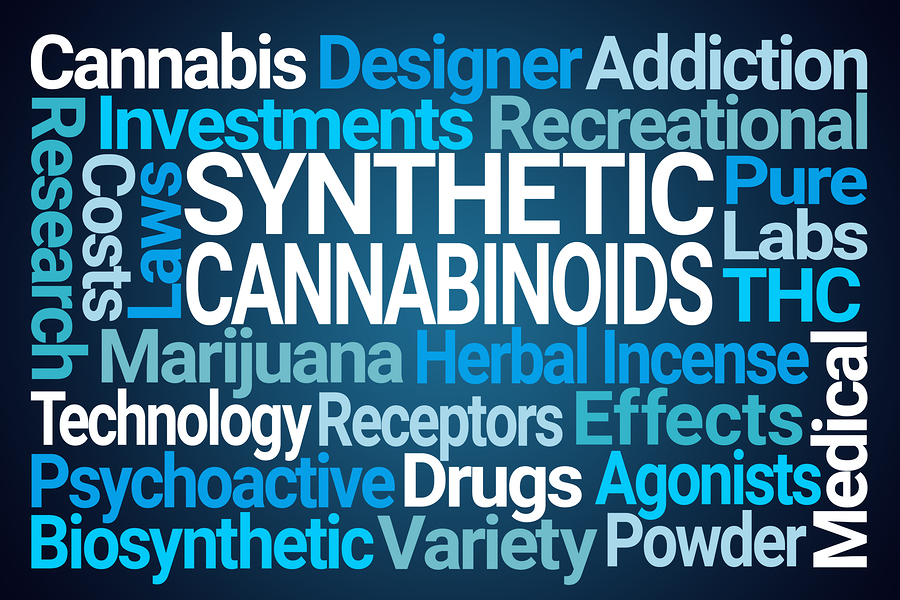 Synthetic cannabis or ‘spice’  is a New Psychoactive Substance (NPS) designed to mimic the effects of cannabis. Sold online from 2004, synthetic cannabis was originally developed as a legal alternative to cannabis.

Whilst these drugs often affect the same receptors in the brain as THC, (delta-9 tetrahydrocannabinol – the psychoactive ingredient in cannabis) these substances can often be hundreds of times as potent. Many of the newer chemicals don’t actually mimic the effects of THC at all, and spice became illegal in all of its forms in the UK in 2016.

Spice is known by hundreds of different names in the UK and usually comes in the form of dried herbs or plant material which has been sprayed with synthetic cannabinoids, although as vaping has risen in popularity it can now be found in liquid form as well. The drugs are usually sold in colourful foil packets with lurid images and brand names, which often make them feel ‘safer’ for users.

Whilst natural cannabis already poses some risk, synthetic cannabinoids are much more unpredictable, with many first-time users reporting extreme adverse reactions from as early as the first use.

One of the reasons for this is that the chemical composition of spice has constantly changed over the years, as manufacturers tried to keep ahead of the law. Although all ‘legal highs’ are now illegal, there are still many varieties of synthetic cannabinoids available, with a number of them having vastly different structures to THC.

Many cannabis users are lulled into a false sense of security with synthetic cannabinoids, assuming that they will be able to predict and handle the effects. However, it is important to understand that there is no safe level of drug use, especially with spice and other synthetic cannabis options, as they are so unpredictable.

How synthetic cannabis will affect you will depend on a range of factors including:

• Your height and weight

• How used you are to taking the substance

• The amount you take

• The chemical that is used, and its potency

Synthetic cannabis is a fairly new drug so there is limited information available about the long-term effects of using it. When it comes to short-term effects, it does offer similar effects to cannabis, as well as some different and more harmful effects including:

As mentioned previously, there is no safe way to use synthetic cannabis. Every time you take it you run the risk of serious adverse effects or even death. However, for those who do take it, some of the ways to inhibit the risk include:

• You should always try to take a small dose of any batch first (less than the size of a match head), so that you can gauge the effects of the drug and increase the dose safely from there. The strength of the drug tends to vary from batch to batch so even if you have taken a specific brand and type many times before you still cannot be sure how this batch is going to affect you.

• Ingesting synthetic cannabis without tobacco or a ‘mixer’ such as dried parsley, or through a bong or pipe, makes it more likely that you will overdose or suffer a bad reaction.

• People with mental health conditions should completely avoid spice. Synthetic cannabinoids can intensify the symptoms of anxiety and paranoia, as well as trigger psychosis in those who are predisposed to it.

• Unpleasant emotional effects and anxiety may be reduced by taking these drugs in a familiar environment with people that are known and trusted.

Knowing When To Avoid Spice At All Costs

• When you are under the influence of alcohol or any other drugs, but particularly crystal meth or ecstasy as these are stimulants

• When driving or operating heavy machinery

• When you are alone

• If you have an existing mental health problem

• If you have an existing heart problem

Before this law was brought in, spice and a range of other legal highs were free to buy online or in high street stores, but are now completely unregulated and only sold through dealers.

With all of the risks and adverse effects listed above, it can be hard to understand why anyone would try spice in the first place, and why they wouldn’t be able to just stop when they are experiencing unpleasant effects.

For many, addiction to synthetic cannabinoids comes from a wish to escape from pain or unpleasant realities. For this reason, spice and other forms of synthetic cannabis are popular with the homeless and people in prison, because it is cheap and easily accessible.

Because of the price and availability, it is reported as being used by students and even younger children. Some people begin taking the drug believing it to be natural cannabis, whilst others aren’t aware of the effects that they may suffer.

This means that one of the only ways for addicts to quit comfortably is to enter a rehabilitation centre. In rehab you will be able to work with professionals who can provide medical and psychological support to help you to kick your addiction, and ease the symptoms of withdrawal.

Cassiobury Court offers a detox and rehab programme that includes medication, therapy and a range of wellness activities to help you to get back to full health. This will help you to recover from your addiction and avoid falling back into old habits when you leave rehab.