Cuts to Addiction Services Since 2010 [INFOGRAPHIC] 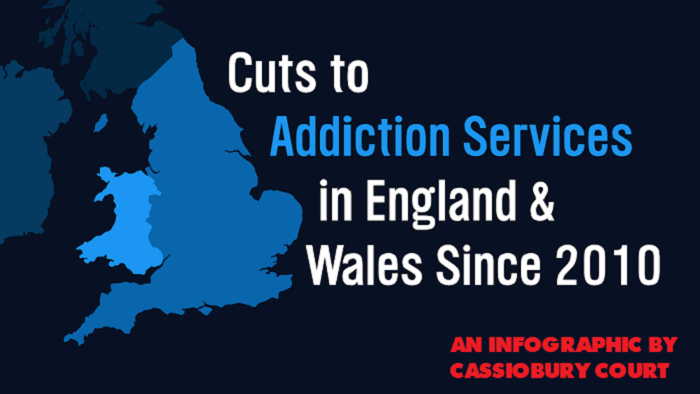 In this blog post, we unveil our latest infographic titled “cuts to addiction services in England and Wales since 2012”. Since 2010, successive Tory Governments have aimed to save public money by cutting addiction services. Since addiction is often stigmatised, perhaps these politicians feel justified in cutting these unarguably essential services.

These cuts really started to take hold following the enactment of the Health and Social Care Act 2012. This Act meant addiction services is now solely commissioned by local authorities and not the NHS.

Before 2012, long term Government investment in addiction services saw year-on-year decreases in drug-related deaths. These improvements have now been utterly wiped out.

An example of this injustice is in the City of Birmingham. Addiction services saw their budget cut from £26m to £19m in 2015-16.

Rises in Drug-Related Deaths since 2012

Following the enactment of the Health and Social Care Act 2012, drug-related deaths have sharply increased:

Staffing levels have been hit hardest by these cuts. Staffing cuts mean fewer psychiatrists, psychiatric nurses and clinical psychologists are available to assist people suffering from addiction issues. Addiction services are instead of relying on doctors without specialist qualifications and volunteers.

Harm reduction is used to describe the methadone programme. This is when those addicted to heroin are given methadone as a ‘replacement’. Whilst the merits of this approach are debatable, thousands of people have come to depend on methadone to control their addiction to opiates, and going without really forces these people back onto street heroin.

All this is putting a strain on A&E services

The above state-of-affairs means many people are seeking out the assistance of A&E instead of specific addiction services. The number of hospital admissions in 2015/16 relating to drug poisoning was 15,074. This represents a 51% increase compared to 2005/05.

A solution to these problems

The Royal College of Psychiatrists proposes a three-part solution:

Now, finally for the infographic…

Below, we unveil the infographic visually representing the above facts. At the footer of the infographic, there is an embed code. You may copy this code to insert this infographic into a blog post on your own website.

If you control a website, we would appreciate it if you could link to this infographic. You could perhaps add the link to your ‘useful links’ page, or embed the infographic in a blog post. This link will help to inform others of the important information contained in this infographic.

Below, we list the references we used when compiling the above infographic: