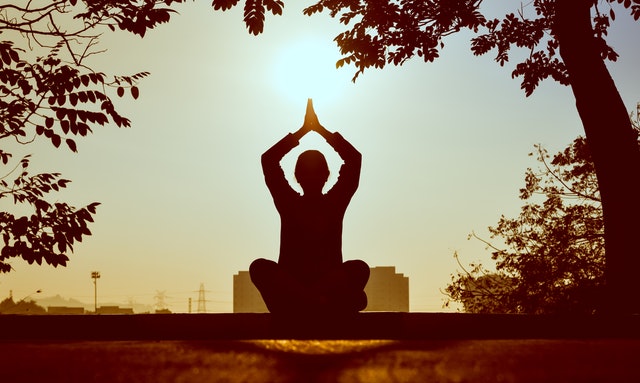 At Cassiobury Court we provide a wide range of treatments ranging from psychological to practical and wellbeing therapies. Meditation and yoga is a popular option with our clients, and is a great way to deal with addiction both inside rehab and back in the outside world.

Originally found only in Hindu scriptures, meditation practices as we know them go back to around the 5th or 6th centuries. Meditation is popular with a number of major religions, but is not a religious practice, and can be done by anyone seeking peace, relaxation or enlightenment.

Meditation is performed by quieting the mind, getting rid of the ‘buzz’ of thoughts that are usually flowing through the mind at any one time, and becoming focused on one specific thought or affirmation. It is very relaxing and can be used to halt feelings of anxiety or fear. There are led meditation practices available in which a teacher or yogi will talk a group or individual through a meditation, but people often find as they get more used to the process that they are able to do it on their own as well.

Meditation can be used for almost anything that requires getting into a focused state of mind. It is a very popular element in various forms of rehabilitation now, as a way to get back in touch with yourself and your feelings. Getting back in touch with your body and mind, and restoring your control over them is a very powerful feeling for addicts who may have felt that they had completely lost control in the midst of their addiction.

Not only is meditation therapeutic and useful during the early days of detox, but once you have practiced it and gotten used to the practice, it can be extremely useful to take with you when struggling to get back into your everyday life outside of rehab.

Benefits Of Meditation For Addiction

Mediation might sound like a fairly simple process, but it is very beneficial for treatment of almost any ailment. Meditation can help in the following ways:

Meditation requires deep and focused breathing that increases energy levels and lowers blood pressure. It increases the serotonin production in your brain that improves your mood and is even known to alleviate pain in the body that has been caused by holding tension.

Mediation is incredible for relaxation and maximising calm, decreasing stress and helping the mind to focus. It is known to leave people with a great sense of inner peace on completion of a session.

Getting in touch with your entire body and mind gives you a greater understanding of yourself. Your intuition can improve and you find it easier to complete difficult personal transformations (such as removing addictive thought patterns) because you are in touch with every part of yourself. Meditation also increases creativity, open-mindedness and happiness.

How Does It Work?

There is a science to how meditation works! Within the brain, there are five major categories of brain waves. The faster your brain waves the quicker your mind works, which can lead to anxiety and a feeling of ‘rushing’ thoughts. Meditation is able to slow down your brain waves, moving them them from a higher frequency to a lower one, helping you to be more deliberate in your thoughts and actions.

The five brain wave states are:

Many studies have been performed to back up scientists’ long held beliefs that meditation is a useful tool in treatment for addiction.

A 2015 study published in the JAMA Psychiatry Journal recruited 286 people who had completed a rehabilitation programme and divided them into three groups: a 12-step group, a cognitive behavioural therapy group, and a mindfulness meditation group.

After one year, whilst 17% of the CBT group and 14% of the 12-step group had relapsed, the mindfulness meditation group had only 9% of its members relapse.

These findings are not unusual. Another 2015 study of 93 patients found that those in a treatment group who continued to practice mindfulness at home after completing rehabilitation had lower use of alcohol and drugs than those who did not. Interestingly, after they had ceased practicing mindfulness and moved back to standard treatment, these gains were steadily lost.

In the same vein, a preliminary study by Witkiewitz & Bowen (2010) showed that mindfulness-based treatment is successful in the treatment of depression, which is one of the things that can cause patients to relapse on leaving rehab.

Everyone has a preference when it comes to how they meditate. Some people prefer mindfulness meditation, in which they sit and concentrate on breathing and clearing their mind. Others prefer meditative exercise, like yoga, which can make it easier for those who struggle to focus when they are not distracted.

Yoga is helpful on a number of levels for addicts, with postures helping to improve the stamina and wellbeing of the addict, as well as their self-confidence. Breathing is very important in yoga, not only for meditative reasons but also to allow them the energy to perform the routines. Yoga also unifies the body and mind completely, which makes it preferable for those in the early stages of learning meditative practices, who may struggle to otherwise focus completely on the practice.

At Cassiobury Court we can teach you how to do both meditation and yoga, and you can use one or a combination of the two as a complementary therapy alongside your other treatment. This will help you not only during the early stages of detox, but in keeping yourself relaxed and together in the difficult first days after your treatment has finished.