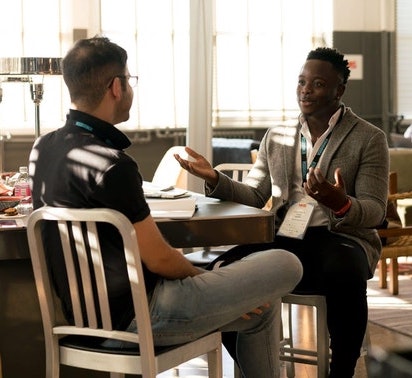 In this A-Z Guide, we aim to inform you about the use of cognitive behavioural therapy (CBT) in the treatment of drug and alcohol addiction. At Cassiobury Court, our alcohol rehab centre utilises CBT in the fight against addiction. CBT focuses on altering your thought patterns and resulting behaviours. In fact, CBT is used to treat a wide range of mental health problems including depression, anxiety disorders (social anxiety, panic disorder and post-traumatic stress), eating disorders as well as substance misuse.

CBT seeks to break down psychological problems into smaller components, often trying to identify certain problematic thoughts and behaviours. Once these problematic thoughts have been broken down, CBT offers a straight forward way for your therapist to intervene and promote your recovery. You will also learn new techniques that make it less likely for you to face these identified psychological problems in the future.

For example, say the environmental factor is you have a neighbour who waves to you every morning. One morning Peter sees his neighbour, Jane, but Jane doesn’t wave at Peter. This causes Peter to think “I must have done something wrong.” This thought causes Peter to experience light anxiety and discomfort. The next morning, Peter’s behaviour is altered as Peter now tries to avoid Jane to avoid these bad feelings.

Later on, Peter’s wife Carol also sees Jane. Jane also fails to wave at Carol. Unlike Peter, Carol assumes Jane must not have seen her. This thought doesn’t affect Carol’s mood so she does not attempt to avoid Jane the following day.

As you can see, the above illustrates thoughts and interpretation lead to two very different emotional and behavioural outcomes based on the same event (when Jane fails to wave at Peter and Carol).

The aim of CBT is to change the client’s thought with the aim of ultimately altering the client’s emotions and resulting behaviour.

The ABCDE model of CBT

The backbone of CBT is the ABCDE model. This model is summed up below:

Utilising the ABCDE model, therapeutic clients are told to identify “activating events” that trigger automatic thoughts that lead to negative emotional consequences. Clients are then taught to dispute these thoughts by assessing the validity of these thoughts.

Whilst the client may find evidence in support of these thoughts, it’s also likely he or she will discover evidence repudiating these thoughts. Clients are then encouraged to form effective new beliefs that do not encourage destructive behaviour and negative emotional consequences.

The three types of beliefs

CBT helps the client to identify, question and challenge automatic thoughts and core beliefs that cause psychological problems and destructive behaviours. During CBT sessions, clients discover the link between their thoughts, emotions and actions.

Now we shall describe how the above three beliefs interact with each other. For instance, let’s say you fail an exam. You may infer from this that you will always fail, so you will never amount to anything in life. This inference/automatic thought is accompanied by the core belief of “I have to succeed in my career.”

This inference and core belief leads to an evaluation that “I am a worthless individual.” The consequence of this will be feelings of hopelessness, a lack of effort and general depression. The aim of CBT is to change these negative emotional consequences of hopelessness and depression by changing the client’s core beliefs and automatic thoughts that arise when exposed to certain activating events.

Although the client’s core belief of “I have to be successful” is kept intact, his or her irrational inference to an activating event has altered so negative emotional consequence do not arise. Thus, even though the client has experienced the same activating event, he or she experiences a different emotional reaction because the inference has altered.

Disputing the inference is not the only way to alter emotional responses and actions. CBT also attempts to help the client to affirm the inference by assuming the worst. For instance, if you fail your exam, you are encouraged to believe you will never ‘amount to anything.’

CBT then attempts to dispute the core belief as opposed to the inference. For example, you are taught to believe there is no reason to be successful in your career because this has no bearing on your worth as an individual.

Thus, although failing your exam makes you believe you will never amount to anything in life, this doesn’t cause you to believe you are a worthless person because your core belief has been altered. You now believe you can go on and live a fulfilling and worthwhile life despite an unsuccessful career.

Ted is a 58-year-old retail worker. Ted’s manager, Peter, often gets very angry at Ted and shouts at him in front of his colleagues. Peter’s anger is classed as the ‘activating event.’

Let’s analyse how this situation affects Ted’s emotions and actions:

The consequence of the above is that Ted loses his temper and shouts back at Peter. Ted is also depressed and miserable at work as a result. The approach of CBT is to dispute the underlying inferences that arise when Peter shouts at Ted. For instance, Ted’s therapist teaches him that because his boss shouts at him, it doesn’t necessarily mean his boss is misjudging him or that his colleagues believe that he is incompetent.

Thanks to CBT, Ted now believes his manager shouts at him because his manager is struggling to cope with the demands of his own job, and not because Ted is incompetent. This is also the conclusion likely to have been drawn by Ted’s colleagues. This means Ted now believes his colleagues do not conclude he is incompetent because of Peter’s outbursts.

Although Ted’s core belief that others must approve of him is intact, his inference/automatic thoughts have been altered to such a degree that negative emotional consequences no longer arise when Peter becomes angry with him.

Alternatively, Ted’s therapist may assist him in disputing his underlying core belief that ‘others must approve of him.’ The therapist would also attempt to affirm the inference. Thus, Ted is told to assume the worse, that yes, his manager and colleagues believe he is incompetent.

However, Ted is also taught that other’s approval is not something that will affect his sense of self-worth. Although Ted is aware that Peter and other colleagues many disprove of him, he now finds this easy to tolerate because he does not equate other’s approval with his own sense of self-worth. Therefore, Ted doesn’t become angry and act in a manner that is detrimental to his interests when he is exposed to this activating event.

The general philosophy of CBT is that the inferences and evaluations that give rise to people’s psychological problems arise from core-beliefs. These core beliefs manifest as problems because a certain situation or state-of-being must be a certain way with no flexibility as to other outcomes.

CBT practitioners refer to this mentality as “musts,” “shoulds” and “have-tos” i.e. you should behave in a certain way, you have to have a certain characteristic or you must be treated in a certain way by others.

Do you engage in MUST-urbation?

American psychologist Albert Ellis has termed this mentality as “MUST-urbation” and the “Tyranny of the shoulds.”

Below we list a number of common neurotic automatic thoughts/cognitive distortions:

CBT refers to the above as ‘automatic negative thoughts’ (NATs) or cognitive distortions. These NATs are challenged during CBT sessions using a range of cognitive restructuring exercises.

The three most common evaluations arising from inflexible core beliefs are said to be:

CBT practitioners aim to rationalise these beliefs in a number of ways e.g:

CBT as it applies to addiction treatment

Many people suffering from addiction do so because they have established a number of negative thinking patterns and beliefs. Unfortunately, many of these people are not fully aware of these thought patterns and beliefs that fuel their destructive behaviours and poor emotional standing.

How CBT assists sufferers of addiction

Once these thoughts and beliefs are altered, CBT seeks to help the client develop coping and avoidance strategies that make relapse less of a risk. This is achieved by helping the client alter thought patterns that directly cause or encourage destructive behaviours. This process is known as ‘cognitive restructuring’ or ‘functional analysis’.

Thoughts that encourage addictive behaviours are known as ‘trigger of addiction’ or ‘maladaptive cognitions.’ Clients are asked to write about these thoughts as they arise in a Thought Record (TR).

Making use of the ABCDE model for addiction treatment

Utilising the ABCDE model outlined before, clients are told to identify:

How this works in practice

The therapist typically begins by getting the client to discuss their addiction by asking them a series of leading questions. The client may say something such as “I can’t stop drinking alcohol.” The therapist may ask “What does that mean about you?” The client reveals a core belief such as “Because I’m hopeless” or “I’m a total failure”.

The therapist then helps the client collect evidence that either supports and discredits this belief. An attempt is then made to dispute this belief and then replace this belief with another more rational belief that doesn’t result in addictive behaviours.

Below we list a number of common automatic thoughts often uncovered during CBT sessions for addiction treatment:

In time, these beliefs are substituted for the below healthier alternatives:

How CBT differs from traditional psychotherapy

Unlike traditional psychotherapy, CBT is a teaching and coaching approach to addiction treatment. Whilst traditional therapy looks at the long term reasons for why a client developed an addiction in the first place, CBT instead teaches clients how to not use drugs and alcohol right now and develop learning skills that help clients stay sober and avoid relapse.

Dealing with triggers of addiction

Below we list a number of common ‘triggers of addiction’ our clients discuss during CBT sessions:

How CBT reduces the power of addiction triggers

Clients are also taught a number of additional ‘coping strategies’ to reduce the risk of relapse.

Following CBT sessions, clients are able to recognise situations and resulting thought patterns that promote drug and alcohol addiction and then avoid or cope with these situations in less destructive ways.